Steve Sweeney entered public service after his daughter was born with Down syndrome. Horrified at the manner in which individuals with disabilities were treated, he vowed to make a difference not just in his daughter’s life, but in the lives of those in his community.

He served on the Gloucester County Board of Chosen Freeholders from 1997 to 2010 and was Freeholder Director from 1998 until 2010. During that time, he helped county taxpayers save $30 million through innovative programs that promoted shared services.

First elected to the New Jersey Senate in 2001, Senator Sweeney took the oath as Senate President on January 12, 2010. He was selected by his fellow Senate Democrats to maintain his leadership position again in 2012, 2014, 2016, 2018, and 2020. He is the longest-serving Senate President in New Jersey history.

An ironworker by trade, Senator Sweeney has taken the lessons he has learned to advocate on behalf of organized labor, the rights of workers, and the needs of working families. He repeatedly sponsored laws to raise New Jersey’s minimum wage, including an increase to $15 per hour, and cost-of-living increases. Senator Sweeney also wrote the legislation creating New Jersey’s Paid Family Leave program and to expand it, learning from his experience with his newborn daughter when he spent nearly two months in the hospital after she was born.

As Senate President, he has taken a leading role in promoting property tax relief, replenishing the Transportation Trust Fund, and refocusing the state’s fiscal priorities. Senator Sweeney has led efforts reforming the public employee pension and health benefits systems. Over the last decade, the Sweeney reforms are saving taxpayers billions of dollars. The reforms included increasing the employee share of their pension, reducing premium costs for the state and employees, and reducing the cost of pharmaceuticals for the state.

Senator Sweeney also has sponsored numerous laws to strengthen the ability of law enforcement to protect children from sex offenders and protect the families of police officers, firefighters, and emergency services personnel killed in the line of duty. He also sponsored a plan to create a statewide network of Child Advocacy Centers that provide safe places for abused children. And he authored a series of bills to advance social justice, making the criminal justice system fairer and more responsible.
Registration is required for the virtual event.  Space is limited. To reserve your spot, please use the link above.  You will be provided event login information upon completing the registration. 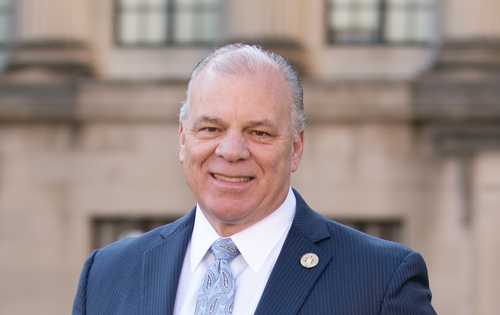