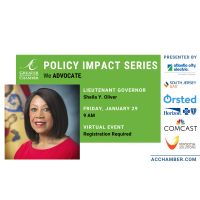 The Greater Atlantic City Chamber will welcome New Jersey's Lieutenant Governor Sheila Oliver as the keynote speaker for the Policy Impact Speaker Series scheduled on Friday, January 29 at 9 AM.  The Policy Impact Series is presented by Atlantic City Electric, Comcast, Horizon Blue Cross Blue Shield of NJ, Orsted, South Jersey Industries, and Versutia Solutions.
Lieutenant Governor Oliver is a self-described ?Jersey Girl,? born and raised in an ethnically diverse Newark neighborhood. Lieutenant Governor Oliver was inspired as a young girl to be a fighter for the voiceless when her eyes were opened to societal injustices and inequities around her, often citing ?A Tale of Two Cities? as her youth awakening. She has since pioneered a successful career in public service advocating for social justice, women?s equality, and education, ultimately becoming the first woman of color to serve in a statewide elected office in New Jersey history. In addition to her role as Lieutenant Governor, she serves as Commissioner of the Department of Community Affairs, where she has led efforts to strengthen and expand initiatives for fair and affordable housing, community revitalization, homelessness prevention, and local government services that support New Jersey?s 565 municipalities. Under her leadership, the Department has also expanded and leveraged a wide range of initiatives aimed at assisting distressed municipalities, including the federal Opportunity Zones tax incentive, the newly revived Main Street New Jersey program, Urban Enterprise Zones, the Neighborhood Preservation Program, and the Neighborhood Revitalization Tax Credit program, which received increased funding.  In her role as Acting Governor, she has signed multiple bills into law, including those that established a Caregiver Task Force to identify ways to support people taking care of loved ones who are elderly or disabled, require all public school students in grades 6-8 to receive financial literacy education, strengthen equal pay for equal work by preventing employers from asking employees? previous salary history, and protect employees from wage theft. Across her career, Lieutenant Governor Oliver has worked in the public, non-profit, and private sectors, and has taught numerous college courses. She has served as a member of both the East Orange Board of Education and the Essex County Board of Chosen Freeholders. In 2003, she was elected to serve the 34th Legislative District in the New Jersey General Assembly. A trailblazer in every sense of the word, in 2010 she became the first African-American woman in state history to serve as Assembly Speaker, and just the second in the nation?s history to lead a state legislative house. A proud alumna of the Newark public school system, Lieutenant Governor Oliver graduated cum laude from Lincoln University, and received her Master of Science Degree in Community Organization, Planning and Administration from Columbia University. She is a proud 40-plus-year resident of East Orange where she treasures her time with her 91-year-old mother, who has always encouraged her to be a critical thinker while fostering her passion for helping people through effective public policy.
Registration is required for the virtual event.  Space is limited. To reserve your spot, please use the link in the right hand rail.  You will be provided event login information upon completing the registration. 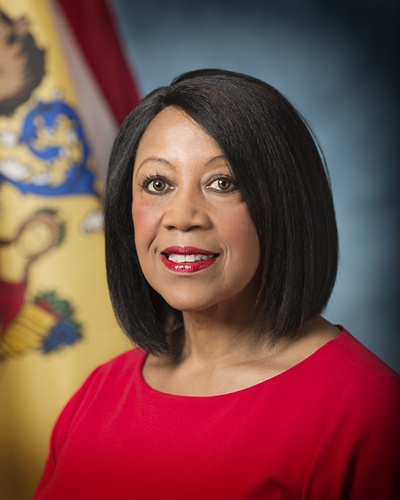